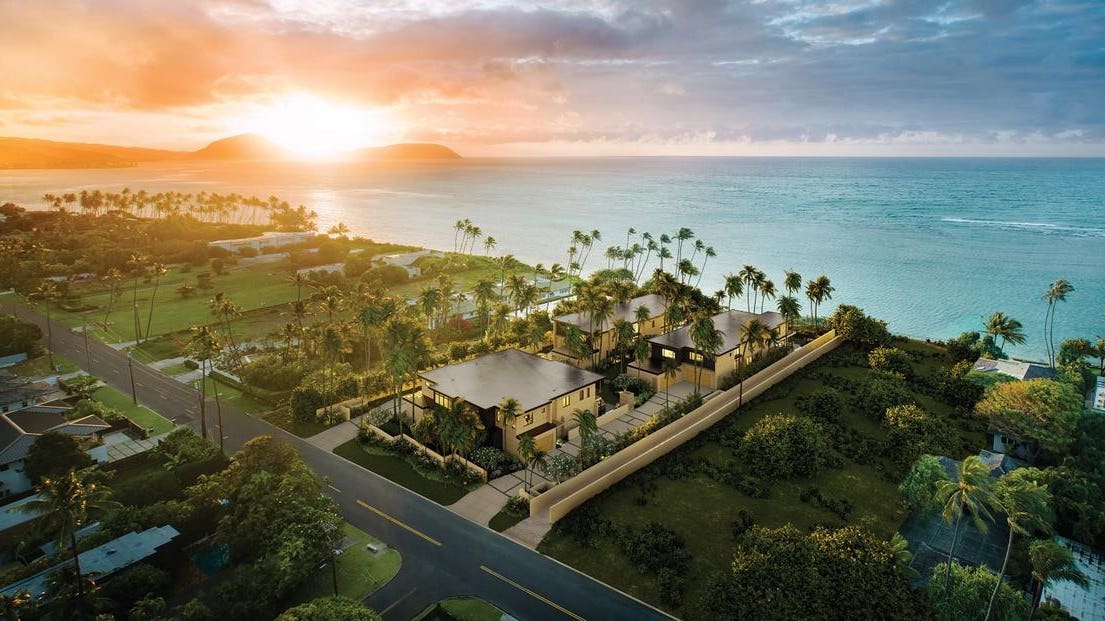 Much like Beverly Hills in Los Angeles or Tribeca in New York, the eastern Honolulu neighborhood of Kahala is famous for the affluence of its residents. Billionaires, celebrities and business moguls worldwide have gravitated to the oceanfront enclave, buying luxury mansions and a paradise where soft-sanded beaches and green expanses of the iconic Diamond Head meet the mighty waters of the Pacific.

Kahala’s ties to the rich and famous are nothing new— this stretch of premier land on the southern end of Oahu was originally owned by Princess Bernice Pauahi Bishop, and later by the Bishop Estate.

In the early 19th Century, residential developments began, and soon after, opulent estates were established along the beachfront. Since then, Kahala has been home to such notable residents as billionaire tobacco heiress Doris Duke, author and politician Clare Boothe Luce and Ebay founder Pierre Omidyar.

Although Kahala’s architecture is varied—styles and designs span across many eras and have multiple countries of origin—there are often common features that exemplify an ideal Hawai’i home, such as Dickey roofs and lanai porches.

Often, design characteristics are used to maximize breathtaking views and effortlessly transition from indoors to out. Floor-to-ceiling windows, flat yards with sparse landscaping or broad lanais are utilized to enhance and showcase Oahu’s natural landscapes.

Space is another luxury afforded to those living in this eastern neighborhood.

“On Oahu, a lot of the lots are small,” said Erik Hinshaw, a real estate broker for Hawai’i Life Real Estate. “But Kahala is an area of estate-sized lots—ten thousand plus is not unusual.”

Living in paradise is rarely cheap, and Kahala is no exception.

According to Hawai’i Life, the median price of homes sold in the last 12 months was approximately $2 million. For that price, prospective buyers can expect to find a smaller, single-family home or teardown.

Closer to the water, prices shoot up to the $5 million to $10 million range—along beachfront locations, homes can go for upwards of $20,000,000.

For those looking to develop a new property, one must consider not only price but also time.

“Developing on Oahu is tricky,” Hinshaw said. “Space is limited and there’s a lengthy permit process that can take years with public hearings and public comment.”

The price-time tradeoff has made pre-approved lots a hot item in luxury development circles. Beachfront properties such as this 58,205-square-foot, six-townhouse luxury development, which includes permits and plans, can command upwards of $25 million.

“Kahala is part of Honolulu, which is the main urban center of Hawaii,” Hinshaw said. “But it’s also on the other side of Diamond Head, so it feels more remote. It’s more quiet and reserved, yet sophisticated.”

The schools in Kahala

Public schools in Kahala are operated by the Hawaii Department of Education, the only statewide public education system in the United States.

Children enrolled in public school attend Kahala Elementary. Located in Kahala proper, Kahala Elementary serves approximately 425 students, pre-K through fifth grade. In the 2018-2019 school year, students performed well above state averages according to the Strive HI Performance Report, with 72% of students meeting standards in language arts compared to 54% statewide, and 69% of students meeting standards in math (the statewide being 49%).

For high school, students may attend Kalani High School which serves about 1,400 students from many residential neighborhoods in East Honolulu, including Aina Haina and Maunalani Heights. On Strive HI testing, 73% of students were proficient in language arts compared to the statewide average of 59%.

Kahala is also home to Mary, Star of the Sea, a private Catholic school with students from kindergarten through eighth grade.

The morning commute for those working downtown is less than fifteen minutes west on I-H-1.

Daniel K. Inouye International Airport is a twenty-minute drive away—an invaluable convenience for frequent travelers or anyone whose work takes them outside Honolulu.

To get to Kawela Bay on the opposite side of the Oahu takes an hour and a half via HI-99.

Hawai’i Life is an exclusive member of Forbes Global Properties, a consumer marketplace and membership network of elite brokerages selling the world’s most luxurious homes.

US and Germany to send main battle tanks to Ukraine
What is a ‘rolling recession’ and how does it affect consumers? Economic experts explain
Moonbirds creator Kevin Rose loses $1.1M+ in NFTs after 1 wrong move
Op-ed: Salesforce appoints ValueAct’s Morfit to its board and a proxy fight may loom ahead
Kenyan Fintech Kwara Raises $3 Million in Seed Extension