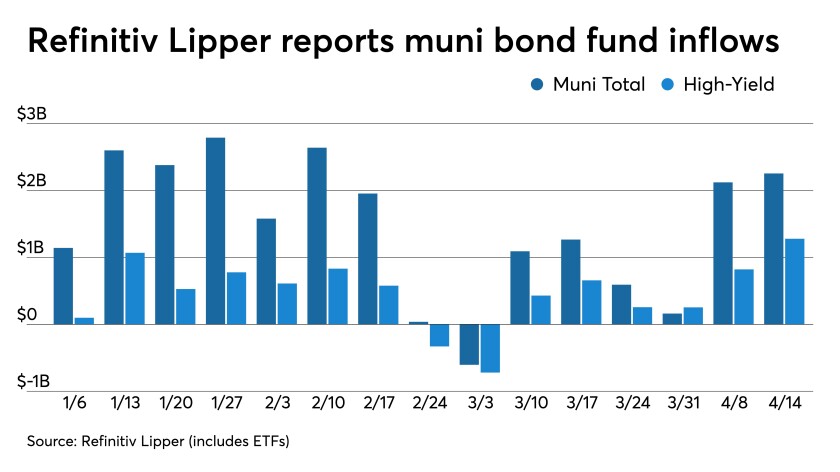 Municipals were stronger as the reality of an improved credit outlook, and strong demand buoyed by fund flows and aid from the Federal government, positioned the asset class to continue to perform well.

“With this, credit spreads continue to compress and any coupon or call structures that offer additional yield are being gobbled up,” he said. “Muni/UST ratios may be rich, but that doesn’t appear to make a lick of difference right now.”

“The muni market is on fire,” Ashton Goodfield, head of municipal bonds at DWS, said on Thursday, noting that tax-exempt valuations versus taxable alternatives have been holding near record lows.

Goodfield said investors have built cash balances over the last year as demand for income was high and interest paid on cash investment was near zero.

In addition, other supporting factors are the high credit quality nature of the muni market, recently buffeted by fiscal support, as well as the demand for tax-exempt income at the same time the notion that tax rates for wealthy individuals could increase during the current administration.

There seems to be no end in sight to the healthy demand for municipal bonds in the primary market as evidenced by recent and new fund flows, agreed a New York manager of underwriting and trading.

“The municipal market continues to be strong as inflows continue to come into bond funds, while the supply calendar continues to be on the smaller side, somewhere between $6 million and $8 billion,” he said Thursday. “Buyers continue to put cash to work all across the credit curve.”.

Trading was robust and much firmer.

Refinitiv Lipper reports $2.3B inflows
In the week ended April 14, weekly reporting tax-exempt mutual funds saw $2.255 billion of inflows. It followed an inflow of $2.122 billion in the previous week. High-yield muni funds reported inflows of $1.279 million, the highest on record after $1 billion plus in January of this year. They reported a hefty $820.890 million the week prior.

The four-week moving average remained positive at $1.282 billion, after being in the green at $1.036 billion in the previous week.

Cautious optimism
An “impressive” showing by Thursday’s indicators suggests “the challenge for companies is rapidly shifting from survival to how to keep up with demand,” according to an analyst.

Four out of the six economic indicators released on Thursday surpassed expectations, with consumers tapping their savings to quench pent-up demand.

In the context of an economy still not fully reopened, the “data [was] impressive,” said Bryce Doty, senior vice president and senior portfolio manager at Sit Investment. These “results are the tip of the iceberg.”

The economy is “transitioning from expectations” to the “incredible reality of just how powerful the rebound is,” Doty added.

Excluding autos, sales rose 8.4% in March, greater than the 5.0% rise economists projected. Sales minus autos are up 19.4% from a year ago.

“With consumers still sitting on a pile of accumulated savings combined with the expected reopening of the service economy this summer, our forecast looks for a consumer spending boom this year that will rival any in living memory for most Americans,” said Tim Quinlan, senior economist at Wells Fargo Securities. “Everybody wins when consumers are flush with stimulus checks.”

Given the timing of the stimulus checks’ issuance, some of the spending gains may stretch into May. But as stimulus fades in the last half of the year, he said, “there is a risk the consumer recovery could stall or at least slow.”

But high savings rate levels “should prevent goods spending from fading too quickly after surging during the pandemic,” Quinlan noted. “That said, it is services spending that we expect to pick up and drive the overall recovery in consumption this year.”

Also released Thursday, the manufacturing sector in the Federal Reserve Bank of Philadelphia region “continued to improve” in April, as the general activity index rose to 50.2 in April, the highest in almost 50 years, after March’s number was revised down to 44.5 from 51.8.

The survey’s prices paid index dipped to 69.1 from 72.6, while prices received climbed to 34.5 from 30.2. The numbers suggest continued price pressures on manufacturers, which are being passed on to consumers.

Economists polled expected a gain to 20.0.

Prices paid jumped to 74.7, its highest read since 2008, from 64.4 and prices received increased to a record 34.9 from 24.2 in the previous month, the Fed said, “indicating that selling prices increased at the fastest pace in more than twenty years.”

“The key question is why yields aren’t moving higher especially given inflation expectations based on the 10-year breakeven rate for TIPS is persistently over 2.3%?” SIT’s Doty asked. “Concerns over international tensions, suspension of J&J vaccines and a looming 33% increase in corporate taxes appear to be overshadowing positive economic news. Look for relief from any of these issues to push yields higher.”

Looking six-months ahead, general business climbed to 39.8 from 36.4.

“Given the huge rebound in retail sales, it makes sense that the Empire Manufacturing and Philly Fed Business Outlook crushed the consensus expectations,” Doty said.

Initial jobless claims fell to a pandemic low of 576,000 on a seasonally adjusted annual basis in the week ended April 10 from a revised 769,000 a week earlier.

Continued claims increased to 3.731 million in the week ended April 3 from a downwardly revised 3.727 million a week earlier, initially reported as 3.734 million.

“A marked decline in jobless claims coupled with solid spending numbers underscores the thesis that the U.S. economy continues to take strides of improvement, at least on a relative basis,” noted Stifel Chief Economist Lindsey Piegza. “On a nominal front, however, with claims still elevated near 700,000 on a three-week average, unemployment at 6.0%, some eight million Americans still without the position of gainful employment and some four million reliant on federal unemployment assistance, it’s clear the recovery is ‘far from complete,’ as [Federal Reserve Board] Chairman [Jerome] Powell reiterated over the weekend.”

But with stimulus and ”artificial support” promoting this growth “returning to a sustainable organic profile appears to be still a distant prospect, potentially years in the making,” she said.

Separately, industrial production climbed 1.4% in March after a decline of 2.6% in February, first reported as a 2.2% fall.

Economists had expectations of a 2.8% increase.

Capacity utilization gained to 74.4% in March from a downwardly revised 73.4% in February, first reported as 73.8%.

“Despite the euphoria signaled by various purchasing manager surveys, overall March industrial production only partly recovered the output lost in February,” said Quinlan and Sarah House, senior economist at Wells Fargo Securities. They noted production was more than a full point short of projections despite the clearing of some supply chain issues.

“Some of the softness is attributable to utilities, but we are more concerned that manufacturing output was not stronger.”

The sector should “be booming,” they note. With the Institute for Supply Management manufacturing at its highest since the 1980s, “you would expect to see a surge in output, yet the increase for manufacturing output in March was just 2.7%, which is not even enough to fully offset the 3.7% decline in February.”

Also, business inventories increased 0.5% in February, after a revised 0.4% rise in January, first reported as a 0.3% increase.

Builders’ confidence rose slightly in April as demand remained “strong,” according to the National Association of Home Builders, with its housing market index climbing to 83 from 82 in March.

The current sales index rose to 88 from 87, while traffic of prospective buyers grew 75 from 72, and sales expectations fell to 81 from 83.

Lynne Funk and Chip Barnett contributed to this report.