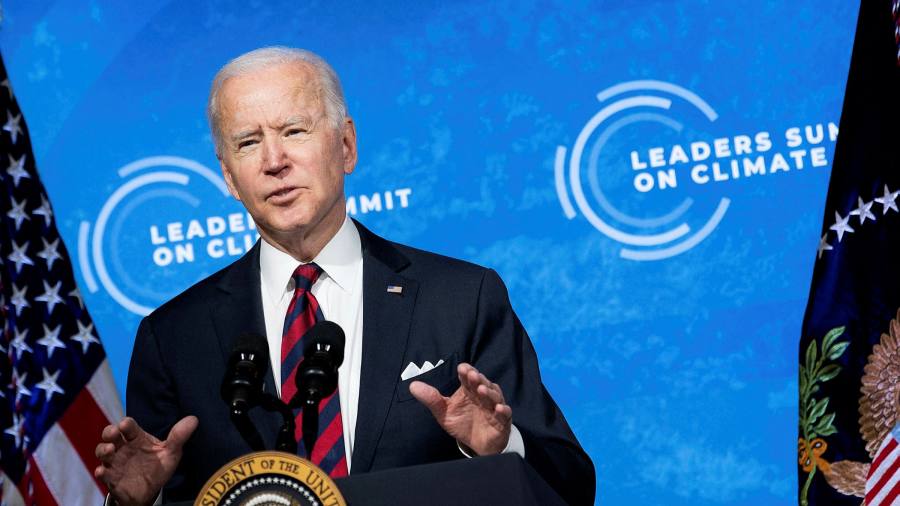 Joe Biden is preparing to announce a string of tax increases on wealthy Americans, including a nearly doubling of levies on capital gains for people earning more than $1m, to pay for a massive increase in funding for childcare and education.

The economic package from the White House, which is worth more than $1tn, could be announced as early as next week, according to people familiar with the matter, when Biden is scheduled to address a joint session of Congress for the first time since becoming US president.

The tax increases would reverse some of the tax cuts passed in 2017 by former president Donald Trump and are expected to track Biden’s campaign proposals, which targeted individuals earning more than $400,000 per year.

Among them are an increase in the top income tax rate from 37 per cent to 39.6 per cent and the application of ordinary income tax rates to capital gains and dividend payments for Americans earning more than $1m a year.

Coupled with a surtax on investment income for the wealthy introduced at the time of Barack Obama’s health reform, this would bring the total capital gains tax rate for the richest Americans to 43.4 per cent. Biden has also been considering taxing unrealised capital gains passed on to heirs at death, and increasing payroll taxes on the wealthiest Americans.

The proposals prompted a sell-off in equity markets, with the blue-chip S&P 500 index falling as much as 1.3 per cent in the hour after reports of the potential tax rises first emerged, before rebounding slightly. The technology-heavy Nasdaq Composite initially fell about 1.7 per cent, before also trending up again.

Shana Sissel, chief investment officer at Spotlight Asset Group, said markets would continue to sell off if the changes to the tax code — which are intended to go into effect next year — are approved by Congress, as investors try to crystallise gains ahead of higher rates.

“We will see a lot more selling at the end of the year as people try to get in front of that,” said Sissel.

The US president is planning to use the revenue from the tax rises to fund what the White House is expected to call the “American Families Plan”, which will extend more generous child support until 2025, and provide extra funding for universal pre-kindergarten schooling and community colleges.

The White House declined to comment on the specific details of the plan.

The American Families Plan would be the third massive economic package proposed by the US president since he took office a little more than three months ago. In March, he enacted a $1.9tn fiscal stimulus plan, and later proposed a $2tn infrastructure bill that faces an uncertain fate on Capitol Hill.

While Biden has said the extra spending on children and families was needed to strengthen the US middle class, the proposals threaten to open a new front in the administration’s conflict with Wall Street. American business is already lobbying against the corporate tax rises proposed to fund infrastructure spending.

The American Families Plan was originally expected to be grouped with the infrastructure package but White House officials decided to split them apart, believing that doing so would make it easier to secure approval from a deeply divided Congress.

As he pushes ahead with the new tax-and-spend proposal for childcare and education, Biden is struggling to gain momentum on Capitol Hill for his infrastructure plan.

Senate Republicans proposed their own $568bn plan on Thursday — far below the levels of spending sought by the White House. The Republican offer is heavily weighted towards traditional infrastructure projects, with $299bn devoted to roads and bridges, $65bn to broadband, $61bn to public transit systems and $44bn to airports.

By contrast, the White House plan seeks broader investments in research and development, manufacturing subsidies and retooling buildings, while devoting much more federal funding towards tackling climate change — a priority for many Democrats.

The Republican plan — led by Shelley Moore Capito, the West Virginia senator — does not include any of the corporate tax increases proposed by the White House, suggesting instead that the proposal’s cost should be covered by higher user fees.

“This is a serious attempt to offer . . . the most robust plan that we put forward ever as Republicans,” Capito told reporters on Thursday. “And I think that the American people want to see us working together.”

Beachfront Perch Offers Luxury Living Along Florida’s Atlantic Coast
US and Germany to send main battle tanks to Ukraine
92% of millennial homebuyers say inflation has impacted their purchase plans, but most are plowing ahead anyway, study shows
Homebuilder sentiment rises in January for the first time in a year, thanks to lower mortgage rates
These common misconceptions can prevent you from achieving that perfect credit score