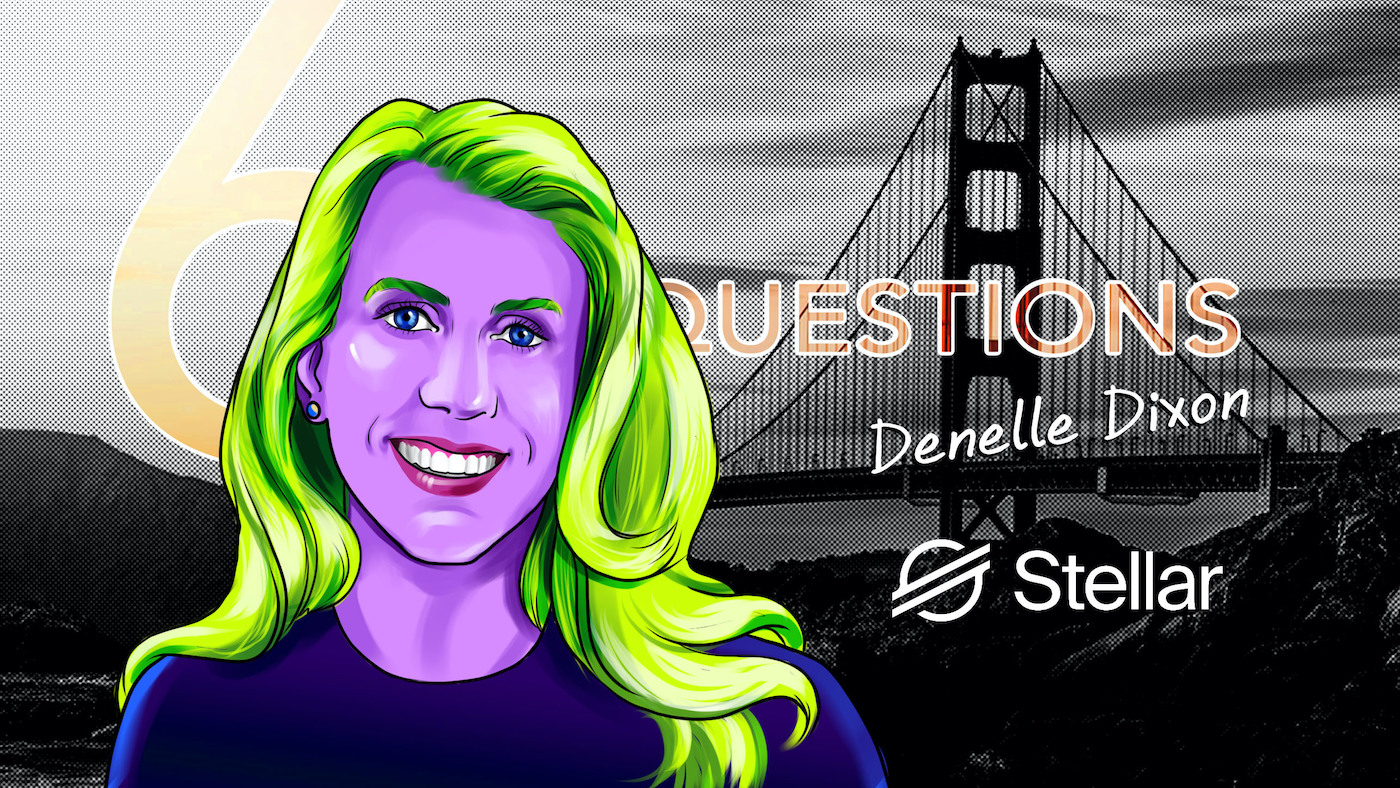 We ask the buidlers in the blockchain and cryptocurrency sector for their thoughts on the industry… and we throw in a few random zingers to keep them on their toes!

This week, our 6 Questions go to Denelle Dixon, CEO and executive director of the Stellar Development Foundation.

Denelle Dixon is the CEO and executive director of the Stellar Development Foundation, a nonprofit organization using blockchain to unlock the world’s economic potential by making money more fluid, markets more open and people more empowered. Before joining Stellar, Denelle served as the chief operating officer of Mozilla, one of the most successful mission-driven open-source organizations. During her tenure at Mozilla, she led the organization’s business, revenue and policy teams, including the ongoing fight for net neutrality and the global effort to ensure that people can control their personal data. She also pushed Mozilla to understand how to partner with commercial entities while staying true to its core mission of openness, innovation and opportunity on the web. A lawyer by trade, Denelle previously served as a general counsel and legal advisor in private equity and technology. Throughout her career, Denelle has been a vocal advocate for net neutrality, encryption, the disclosure of vulnerabilities by governments, and greater user choice and control.

1 — What’s one problem you think blockchain has a chance to solve but hasn’t been attempted yet?

There is no shortage of ideas for what blockchain can solve in terms of efficiency, transparency, data security, speed and cost. The great thing is blockchain’s versatility can be applied to most if not all industries ranging from finance to healthcare to education to retail. And blockchain has been around long enough that it’s not just for crypto enthusiasts anymore. Companies, organizations and institutions are now looking for ways to make blockchain part of their tech stack. Essentially, if there is a process that can be improved upon with technology, blockchain has the potential to be part of that solution.

But blockchain needs to further mature before we see a fully comprehensive solution happen. So, maybe “attempt” isn’t the right word here so much as “fully implemented.”

I would love to see blockchain tackle cybersecurity. Staying indoors throughout the pandemic has only amplified people’s reliance on technology — through their modes of communication, shopping habits or content consumption/creation. But it’s difficult for users to choose between protecting their data and the incentives provided to them for providing access to their data — not to mention that users are constantly at risk of being scammed or hacked. So, while users need to take a more vigilant approach to safeguarding their own data, blockchain can protect users at the product level via decentralization and built-in encryption methods. I’m very excited to see where blockchain projects focusing on cybersecurity end up in the coming years.

2 — What do you think will be the biggest trend in blockchain for the next 12 months?

From a general standpoint, as blockchain becomes more consumer-friendly, we’ll see more businesses and individuals begin to adopt it. Interest in blockchain is only rising as the technology and infrastructure becomes more robust and useful, allowing people to solve problems in increasingly versatile ways.

This means that industries beyond just fintech will start thinking of ways blockchain can benefit them. I welcome the diversification of industries as they bring more applications, products and services to blockchain, as it indicates growing acceptance by the public that blockchain really can be part of the mainstream.

Regarding financial systems, the conversation around stablecoins and digital currencies will continue to intensify. We’re finally starting to see buy-in from traditional financial institutions that blockchain is a cost-effective, swift and powerful solution. If these institutions begin issuing stablecoins on their own, as Bitbond and Bank von der Heydt did, the mainstream consumer will become much more comfortable with the idea of digital currencies and blockchain in general.

3 — What’s the most interesting place you’ve ever visited, and why?

This is a hard question because “interesting” could cover so many feelings. If I had to pick one, I would go with Kraków, Poland. While my visit there was brief, I could feel the history — both beautiful and tragic — beaming from within the large, culturally distinct and historically significant areas of Kraków. The contemporary city boasts vibrant businesses with historic buildings and churches and cathedrals dotting the landscape. It was a moving juxtaposition for me, especially after visiting the Jewish Quarter — Kazimierz — which is an ever-present reminder of the tragedies inflicted during WWII combined with more recent brilliance in the resurgence of the Jewish community there with art exhibitions that commemorate the rebuilding. For me, going to Kraków was a lesson in life, art and cultural protection.

4 — What’s the future of social media?

If anyone has watched The Social Dilemma on Netflix, they’re probably aware that social media has deviated far from its original promise: to provide a space where people can voice their thoughts and connect with one another.

We see now that social media has a whole host of problems. Not only have the psychological and cultural impacts of social media been more dramatic than many of us anticipated but current policies and regulations are not enough to safeguard users.

As with most technology, social media in itself is neither good nor bad. It’s a tool, albeit one that is highly susceptible to algorithmic changes and design choices in the hands of a few.

So, will we see a lot more video-driven features because that’s what performs best according to the algorithm? Will we see the voices of a few rise to the top because they happened to say the thing that would get the most eyeballs? Will we see companies increase their prominence on social media because their advertising budgets are the primary source of revenue for these networks? Yes to all of the above.

But now we know where the flaws of social media exist, and these networks need to be reexamined, redesigned and rebuilt with not just the input of a few, but from all voices. That’s what it’ll take to recapture what made social media so special in the first place: to have a platform where your voice can be heard and matters.

5 — What are the top five Crypto Twitter feeds you can’t do without, and why?

Am I allowed to say @cointelegraph?

The other five are (in no particular order):

@CoinDesk: Their focus on data, research and multimedia content help me keep tabs on broader trends, use cases and innovations taking place in crypto.

@TheBlock__: How they stay updated on all the major players in the crypto/blockchain space — short, sweet and to the point.

@ForbesCrypto: They’re one of the biggest crypto pubs on Twitter and for good reason: They get all the exclusives!

@BlockchainAssn: The Blockchain Association has a front seat to DC policymaking and regulations in blockchain and crypto. I appreciate their nuanced takes on the discussions and legislation circulating in the space.

@CoinMarketCap: CoinMarketCap is a data lover’s dream. Aside from the rankings and charts, [what] they’re best known for, CoinMarketCap also puts out great content focusing on global policy, regulations and projects happening in crypto.

6 — Close your eyes and think of a happy place. What do you see?

I see my family, my parents, my partner, our children and our close friends sitting around a bonfire in our backyard playing a game of charades. It is one of my happiest moments — particularly when my team is winning.