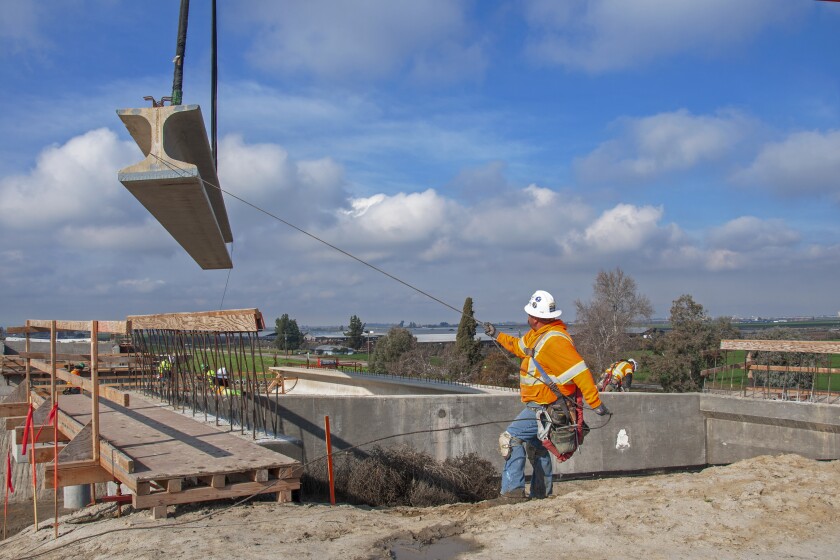 The U.S. Department of Transportation and California finalized settlement negotiations last week that will restore nearly a billion of federal funding to the state’s high-speed rail project.

The settlement agreement that resolves litigation over the Federal Railroad Administration’s termination of the fiscal year 2010 cooperative agreement with California’s High-Speed Rail Authority involved intensive negotiations over several months, according to the parties involved.

The Biden-Harris Administration’s restoral of the $929 million of federal funds is “further proof that California and the current administration share a common vision — clean, electrified transportation that will serve generations to come,” Gov. Gavin Newsom said.

It brings “the state one step closer to getting trains running in California as soon as possible,” Newsom said. “We thank the Biden-Harris Administration and Secretary [Pete] Buttigieg for their partnership on this important step forward.”

The decision restores grant funding that was rescinded by the Trump Administration after Newsom made some confusing comments regarding his support for high-speed rail in his first State of the State speech in February 2019.

At that time, he said he wanted to prioritize construction on the already underway Bakersfield to Merced segment in the state’s Central Valley.

The initial impression was that Newsom planned to scrap the San Francisco and Los Angeles ends of the project and leave the shortened Bakersfield-Merced line.

Former President Donald Trump and others opposed to the project jumped on Newsom’s comments stalling the already approved federal matching funds for the project.

California’s high-speed rail project began in 2008 after voters approved a $9.9 billion general obligation bond measure. Estimates have ballooned to $77 billion for the project, now expected to be completed in 2033, several years behind original projections. Project estimates of $45 billion in 2010 included a second phase to Sacramento that is not included in the new, higher tally.

Speaker of the House Nancy Pelosi, a San Francisco Democrat, called the U.S. DOT’s shift a “vote of confidence” and sign of the restored close working relationship between the federal and state rail authority that will keep the project moving down the track.

“We appreciate the federal administration’s expression of confidence that we are getting this project on the right track,” said Brian Kelly, the authority’s chief executive officer.

The settlement was an important step in advancing an economically transformational project in California, according to an FRA statement.

“This development was made possible because of the strong commitment of the Biden Administration to ambitious, jobs-creating investments in infrastructure, and to state, local and labor leaders across California,” Pelosi said. “The announcement also comes as House Democrats make progress under Chairman Peter DeFazio on a robust surface and rail reauthorization bill, which includes strong funding for intercity and high-speed passenger rail.”