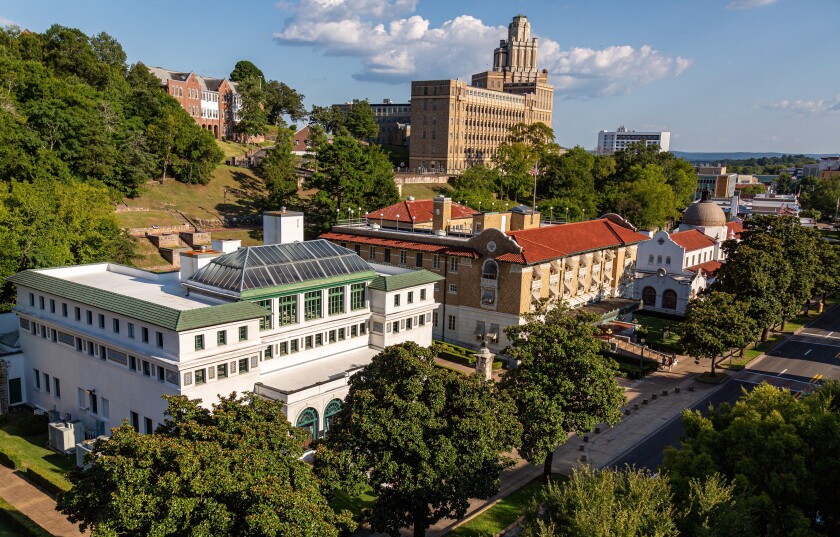 Hot Springs National Park celebrates its centennial this year with visitors expected to arrive in record numbers, a projection with significant implications for the tax revenue of the “Spa City” that shares the park’s name.

Hot Springs, Arkansas, known colloquially as “Spa City,” overlaps the national park with no obvious boundaries between the two. On the west side of Central Avenue, tourists find the historic Bathhouse Row that represents the heart of the national park. On the east side of the street are shops and restaurants that serve the visitors and bring sales tax revenue to the city, most heavily in summer.

“As a city that surrounds a national park, both entities are inextricably linked,” said Lance Spicer, deputy city manager for Hot Springs. “From the namesake thermal waters to protecting against forest fires, the City of Hot Springs and Hot Springs National Park are partners that have worked together for many years.”

The area’s natural hot springs have been protected by the federal government since 1832, making it the oldest federal preserve. It was designated as Hot Springs National Park in 1921.

On opposite ends of Bathhouse Row along the main stretch of Central Avenue sit two historic sites in need of redevelopment.

On the north end, the vacant five-acre site of the Majestic Hotel that burned in 2014 awaits a developer willing to take a risk in partnership with the city.

On the south end, a decaying hulk that once served as an Army/Navy Hospital sits abandoned, a growing economic and environmental threat to the city and the park.

While the city can take the initiative on the Majestic site that it now owns, the former hospital occupies a bureaucratic limbo between the state and federal governments.

The state, which last used the hospital as the Arkansas Career Training Institute, wants to return the building and its 21-acre campus to the feds. The federal government transferred the facility to the state in 1960 with deed restrictions on how it can be used. In addition to the hospital, the campus has 30 other buildings.

Gov. Asa Hutchinson’s 2019 reorganization of state government coincided with the 86-year-old building’s closure but was not the direct cause. In 2020, the former hospital was identified as one of the most endangered historical sites by Preserve Arkansas.

Arkansas Rehabilitation Services will provide limited property management through June 30, according to Chip McAfee, spokesman for the Arkansas Department of Career Education.

“Beginning July 1, 2021, ARS will contact local first responders in the event of an emergency on the property,” he told The Bond Buyer via email. “ARS will likely maintain minimal utilities (electric and water) on the property, for emergency fire response.”

The seven-story former hospital has already experienced an emergency since it closed. Pipes broke during the February freeze, damaging several floors, requiring firefighters to shut off the water.

“At this point, the buildings and property are in a holding pattern with the Department of Interior, Department of Army, General Services Administration, and Arkansas all not wanting to be responsible for the property,” Spicer said. “But this is a big issue not only for the National Park and the state and local governments because of the possible risks posed to the thermal springs and the surrounding buildings.”

The Majestic Hotel site at the intersection of Park and Central avenues has been awaiting redevelopment since it was cleared of wreckage in 2016 and contaminated soil in 2018. The city acquired the property after fire destroyed the vacant building in 2014 and has been seeking a developer over the past couple of years.

After one hotel developer backed out in 2020, the city has entertained an offer from local firm of R.A. Wilson Enterprises for a concert pavilion. Wilson offered $2.2 million for the property.

The city’s board of directors have a scheduled work session with the firm’s chief executive Rick Wilson and his team June 22, where he will present his overall proposal and detail his operating partners.

Despite the pandemic and the challenges of redevelopment, the city has retained its financial health, Spicer said.

“Our sales tax posted a 5.2% increase in the pandemic stricken 2020 and this year looks to be just as strong,” he said.

For some merchants along Central Avenue, finding enough employees to remain open has proven a challenge, Spicer said.

With a population just under 40,000 in a county of 100,000, Hot Springs is the former hometown of President Bill Clinton, whose alma mater Hot Springs High School was transformed in 2005 into art galleries, a performance theater, and a 32-unit housing complex for the disabled.

The city hosts about 8 million visitors a year, many who come for horse racing at Oaklawn Park, also home to a newly opened casino.

In 2019, Arkansas lawmakers passed Act 703, allowing the city to pledge a portion of the net casino gaming receipts for the repayment of local bonds.

“This opens up a new source of funding for municipalities to back bonds and will be a valuable tool for financing capital improvements or economic development projects,” Spicer said.

In defiance of conventional wisdom in a pandemic, a $100 million expansion at Oaklawn Racing Casino Resort was recently completed, featuring a hotel, restaurants, bars, and gaming.

“The total amount wagered and won at Oaklawn has showed rapid growth, and our share of the net revenue has steadily increased since 2005 when the State Legislature authorized expanded gaming within the state,” Spicer said. “We were experiencing increases of 70% and 88% in monthly revenue that peaked at $366,000 in February 2020.”

Statewide, the pandemic cost Arkansas casinos more than $1.4 billion in gaming terminal wagers in 2020, according to data released by the Department of Finance and Administration.

In Hot Springs, COVID-19 closures from March until mid-May 2020 resulted in a drop in revenue of 55%, Spicer said.

“Even with the reduction in guest capacity, wagers have continued to rebound and their recent grand opening is a definite bright spot for the state’s economy,” Spicer said.

Along with horse racing, Hot Springs has been historically associated with baseball and is known as the birthplace of Major League Baseball’s spring training. It was the place where Babe Ruth switched from a pitcher to a hitter after hitting a record distance home run.

In 2019, voters approved $8.5 million of bonds to redevelop the old spring training site as the Majestic Baseball Park Complex. Bonds issued on behalf of the Hot Springs Advertising and Promotion Commission are backed by the 3% sales tax the commission levies on prepared food and lodging. In 2018, voters pledged proceeds from the tax to repayment of a $1.5 million bond issuance for an exhibition hall at Mid-America Science Museum.

The bonds were insured by Build America Mutual, as were a previous issue for the city’s water utility.

“Our bond team of financial advisor and underwriters felt that it would enhance our debt and provide interest rate savings,” said Dorothea Yates, chief financial officer of the city.

In May, 2020 S&P Global Ratings downgraded the city’s water debt to A from A-plus and retained a negative outlook, citing uncertainty from the pandemic and rising debt load.

“The lowered rating reflects our view of the sizable debt issuance that will squeeze all-in debt service coverage to levels we project to be thin by 2022, when the debt service ramps up,” said S&P credit analyst John Schulz. “The negative outlook reflects our assessment of the credit risk posed by the water system’s thinner liquidity and the risk that future rate increases could cause affordability concerns, given median household effective buying income for Hot Springs is only 56% of the national average.”

The debt load of the water fund tripled from $50 million in 2019 to $151 million after this issuance in 2020. Officials earmarked bond proceeds for capital improvements, including a new water intake structure at Lake Ouachita.

According to city officials, the downturn from the pandemic was far less than anticipated.

“Hot Springs has been labeled an aberration when it comes to the local economy in comparison to other cities across the country,” Spicer said.

Yates, who is calling for an increase in the city’s budget for the coming year, credited the federal government’s emergency funding for getting the city past the crisis point.

“The Federal Transit Administration picked up the general fund share of funding for our intracity transit company,” she said.

“They also provided funding for the operating expenses for our airport. Then we were able to pay $1.5 million of public safety salaries with CARES funding. All of that was a big help.”

As the nation emerges from the COVID-19 lockdown, the National Park Service expects a strong summer for communities near national parks.