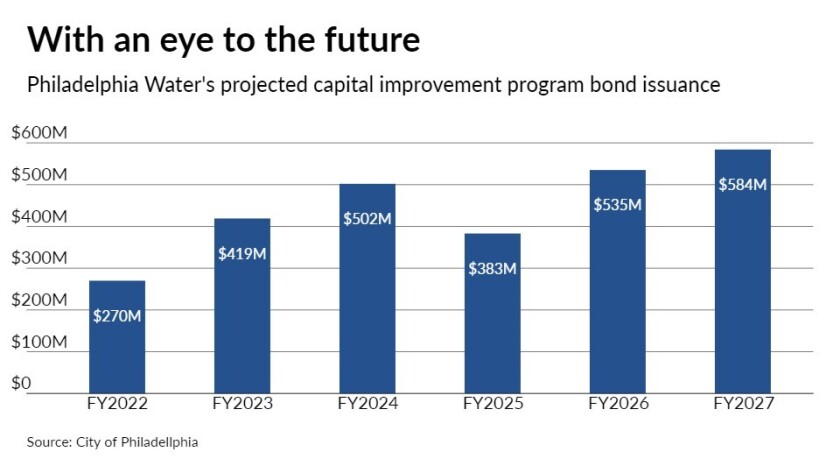 Philadelphia expects to come to market on Wednesday with a $359.5 million sale of Series 2021B federally taxable water and wastewater revenue refunding bonds.

Citigroup Global Markets Inc. and Loop Capital Markets are lead managers for the sale, which will feature an advanced refunding of some Series 2014A and 2015A bonds.

“The A1 rating speaks to [the Philadelphia Water Department’s] satisfactory current financial position, with revenues supported by its large and diverse service area — primarily the city of Philadelphia and its immediate suburbs,” Moody’s said.

The system, according to Moody’s, maintains a satisfactory financial position despite revenue shortfalls in 2020 and 2021 due to business closures related to the COVID-19 pandemic and continued elevated customer delinquencies. The department will retain its service shutoff moratorium through April 2022, “which we expect will contribute to higher-than-average delinquencies for the next year,” Moody’s added.

Moderating factors for PWD’s long-term credit profile, according to Moody’s, are a 2011 consent order administered by the Pennsylvania Department of Environmental Protection to reduce combined sewer overflows and improve water quality within the city, as well as the system’s aging infrastructure, both of which will require significant capital investment.

The state DEP this year extended the city’s compliance dates for its 10-year performance standards. According to bond documents, the total cost for the 25-year program is roughly $4.5 billion, with $3.5 billion related to capital costs and the balance for operations and maintenance.

Drexel Hamilton LLC and Stern Brothers are co-managers for the sale, while Ballard Spahr LLP is lead counsel.

Mayor Jim Kenney and the City Council, meanwhile, are entering the home stretch on the fiscal 2022 budget. The council on Thursday gave its preliminary approval to a roughly $5.2 billion spending plan that allocates $156 million for violence prevention programs.

Council members expect to vote on the budget Thursday. The city must finalize a plan by June 30. Philadelphia received $1.4 billion under the American Rescue Plan, giving it more flexibility.

The budget deal includes Kenney’s proposed wage-tax reduction for residents to its lowest level in 50 years, which the mayor said “will provide critical relief to workers and help attract and grow business.”

The council reduced Kenney’s suggested cut for suburban commuters, while accepting his proposal for city Philadelphia residents. The tax bill would reduce the wage tax on city residents to 3.8398% from 3.8712% while for nonresidents, the drop would be to 3.4481% from 3.5019%.

Council Majority Leader Cherelle Parker’s proposal to lower the parking tax rate to 17% from 25% died in committee. The rate is set to drop anyway to 22.5% from 25% as a temporary tax hike that passed last year expires.