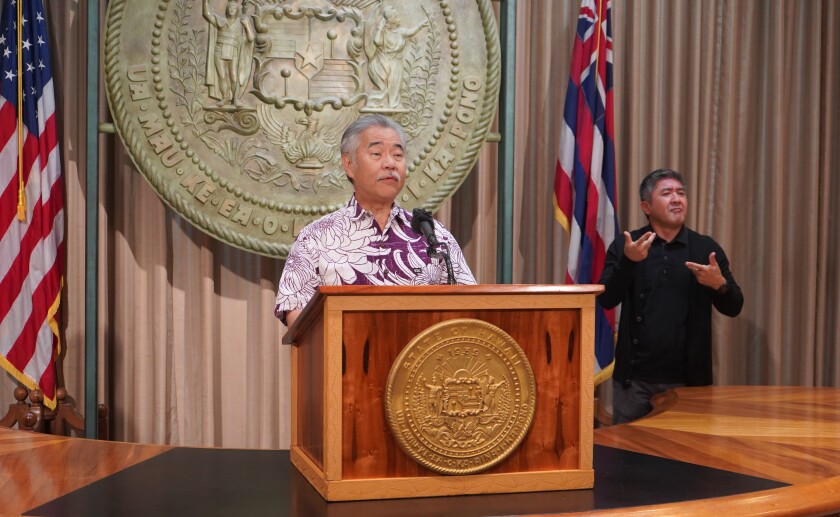 Hawaii lawmakers could be rewriting the state’s $31.2 billion biennium budget during a special session after Gov. David Ige signaled his intent to veto 28 bills.

Some of the vetoes would leave holes in the budget.

Fiscal bills Ige would scrap with line-item vetoes include one that would have used $314 million from the American Rescue Plan Act to repay bond debt.

Ige employed his red pen, in a more forceful manner than previous years, in a dispute among Democrats, who hold 71 of 76 seats in the state Legislature and the governor’s office.

Ige cited as the reason for his vetoes an improved revenue forecast, the availability of federal coronavirus relief money and the U.S. Department of Treasury’s ban on bond payments and reserve fund replenishment as a proper use of the relief funds.

Since the legislature concluded on April 27, the Council on Revenues has increased the general fund revenue forecast “by over $6 billion dollars over the seven year financial period,” Ige said during a press conference Monday. “Because of this, we no longer need to take some of the extraordinary revenue measures that have been proposed.”

The Council on Revenues estimated May 25 that state tax collections would be up 5% from their original forecast to surpass $7 billion this fiscal year. The council voted then to adjust its forecast upward for the last two months of the current fiscal year and for each fiscal year through 2027. It also predicted that Hawaii would realize an extra $450 million of tax revenues in fiscal 2022.

The need for the budget-related vetoes are partly a matter of timing, because the budget passed several days before Treasury’s guidance on the use of federal stimulus funds came out, Ige said.

The Legislature passed a spending plan on April 27 for $15.9 billion in fiscal year 2021-22 and $15.3 billion for fiscal year 2022-23 and, then on May 1 Treasury’s guidance barring the use of stimulus funds to make debt payments and or reserves came, Ige said.

The state received nearly $600 million from the Department of Education and $1.64 billion of general-purpose funding to mitigate state revenue losses and increased COVID-19-related expenses from the Coronavirus Response and Relief Supplemental Appropriations act of 2020 and the American Rescue Plan Act of 2021, according to the governor’s office.

The veto that would bar the planned use of federal funds to pay debt service creates a gap of $160 million in the fiscal 2022 budget and a gap of $257.4 million in fiscal 2023 for debt service, according to the Hawaii Department of Budget and Finance.

“I do support the Legislature’s intent in HB 54 to replenish reserve funds,” Ige said. “That is definitely a gap that will need to be filled before the budget can be approved.”

Hawaii isn’t the only state that was caught out by Treasury’s guidance on how the rescue funds could be used.

The guidance prohibiting the use of rescue funds for debt service and reserve replenishment tempered the positive rating momentum for the fiscal recovery funds for some credits on negative outlook, Fitch Ratings analysts said in a May 18 report.

The guidance would “limit their ability to use ARPA to unwind nonrecurring budgetary actions, including deficit borrowing undertaken in 2020 to compensate for pandemic-related revenue declines,” Fitch wrote.

Kentucky was the only state aside from Hawaii that had made formal plans for use of the ARPA money ahead of the Treasury guidance, Fitch Senior Director Eric Kim said. But Kentucky’s proposals were in line with the guidance; it proposed using the federal funds for repayment of a loan from the Federal Unemployment Account, broadband expansion, and drinking water and wastewater infrastructure. All three are explicitly eligible uses.

The prohibition complicated plans for Illinois and New Jersey as those states were both contemplating using the funds to pay down liabilities.

“It’s possible that some legislators or even governors had suggested reserve replenishment or debt repayment (besides New Jersey and Illinois) with ARPA aid but nothing along those lines was formally adopted as far as I can recall before the Treasury guidance came out,” Kim said. “Very few states had even formalized plans for that funding before the guidance.”

Fitch downgraded Hawaii to AA from AA-plus Oct. 19 ahead of a $900 million GO bond sale. The outlook is stable at the lower rating; it was negative before the downgrade.

Moody’s Investors Service downgraded Hawaii to Aa2 from Aa1 in August. It revised the outlook to stable at the downgraded rating from negative. S&P Global Ratings still has a negative outlook on the state, but hasn’t downgraded the rating from its pre-pandemic AA-plus.

“Our rating on Hawaii reflects our long-cited view of the state’s susceptibility to exogenous shocks that have the potential to hurt its tourism sector, which accounts for 17% of state GDP, along with elevated fixed costs as it continues to address its weak pension funding and large other postemployment benefit (OPEB) obligation,” S&P analysts wrote in October.

Hawaii’s unemployment rate fell to 8.5% in April, according to its Department of Labor and Industrial Relations Board. It had soared to 21.9% as pandemic restrictions hit in April 2020, among the highest in the nation.

Travel restrictions and quarantine rules to limit the spread of COVID-19 hammered Hawaii’s tourism-based economy. But the state has the lowest death rate from COVID-19 of any state, according to data compiled by the Financial Times.

Ige formally gave notice to lawmakers that he intends to veto the 28 measures, but he has until July 6 to make a final decision on his rejection of the bills. He could also decide to sign the bills into law or allow them to become law on July 6 without his signature.

Likewise, lawmakers have until noon on July 6 to return for a special session to override his vetos.

Ige also vetoed House Bill 613, which would use federal funds to award one-time bonuses of $2,200 to Hawaii’s full- and part-time public school teachers.

Another measure on the veto list was House Bill 862, which would allow each of the counties to levy a hotel room tax of up to 3% on top of the existing 10.25% transient accommodations tax.

Though it sounds like a boon for the counties, the measure actually makes up for the Legislature taking $103 million of bed tax revenues typically collected by the state and distributed to the counties. If the measure was signed into law, the counties could impose their own hotel taxes of up to 3% to recoup their losses.

Both the hotel industry and Ige came out in opposition to the bill during session.

The bill would severely damage the Hawaii Tourism authority’s shift to destination management, a program designed to alleviate the adverse effects of tourism on localities, Ige said.

Honolulu Mayor Rick Blangiardi supported the bill, saying it would empower the city to levy the tax and recoup the hotel tax money the Legislature was taking.

A bill that would allow development of a new Aloha Stadium — and others not on Ige’s veto list — can become law without his signature.