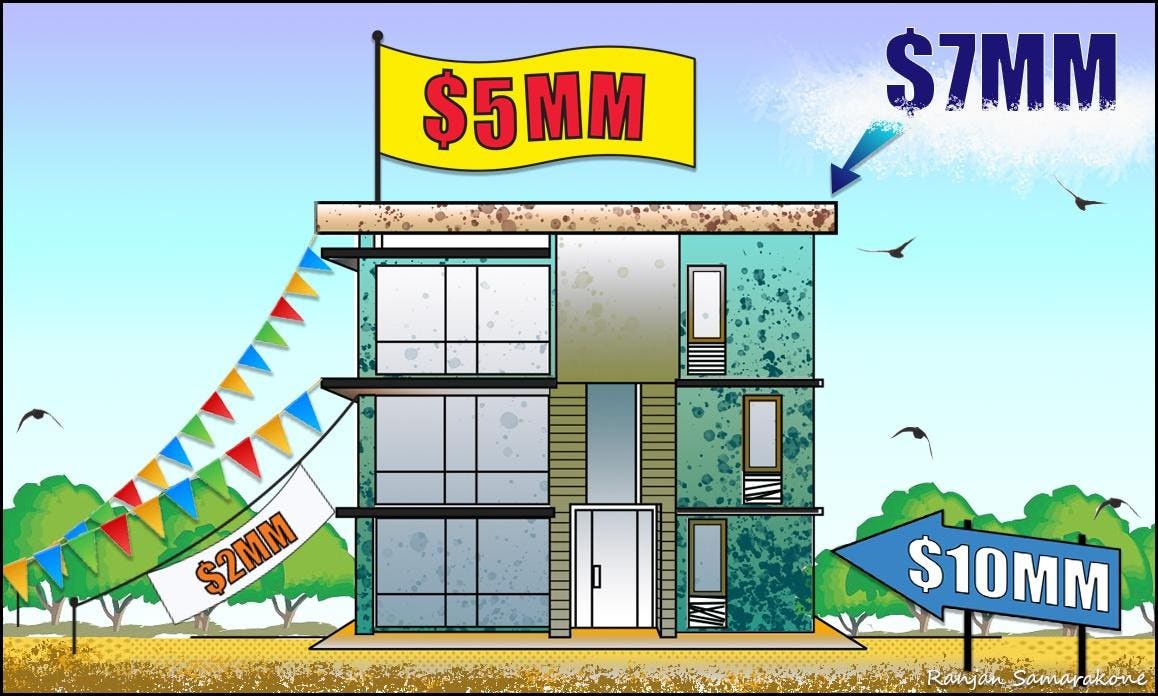 We have recently heard a great deal about fraud allegedly committed by a prominent property owner who gave the tax assessors one version of value of his property but at some point offered his lenders a much rosier value of the same property. And the claims of value went up and down over time. How could that be?

Value of real estate isn’t some characteristic set in stone and nondebatable, like the height of the building of whether it’s made of brick or stucco. To the contrary, value is the outcome of a reasoned analysis, on a particular date, of how much net income the property will produce, for how long, and the reliability of that net income, as well as many other characteristics of the building. An owner might have one conception of value. An appraiser, whose job it is to estimate value, may have a different conception. And an appraisal may apply different approaches to the valuation problem depending on the purpose for which value is being estimated.

Ultimately value is nothing more than what an appraiser (or sometimes the property owner or someone else) thinks a building should sell for on a particular date, taking into account then-current circumstances. It’s an opinion. No one should believe any opinion about value without understanding and agreeing with the basis for that opinion, even an appraisal.

A professional appraiser will consider leases in place, likely changes in the leasing profile over time, the expenses of the property, the cost to replace it, alternative uses, upcoming capital outlays, and a panoply of other property characteristics. The appraiser should also have some knowledge of local market conditions, including recent similar sales and present and likely future competition, and take them into account in estimating value.

When appraisers look into the future, they will see future outflows and inflows of cash. The appraiser must decide how to discount all those outflows and inflows to present value. The appraiser will need to choose an appropriate discount rate for that purpose. That choice will have a tremendous impact on value. It will depend on the tastes of investors at the time, interest rates, the stability of income, and other elements. It’s a judgment call.

If tenants are in trouble or if some rents are above market and the leases will expire soon, an appraiser will know that the rents will drop when the property is re-leased. So the appraiser will probably reduce projections accordingly, giving the rents a haircut to reflect those likely future issues.

Any appraiser in essence tries to predict how much a smart and reasonably informed buyer would pay for the property. It’s just a prediction. Appraisals can be conservative or optimistic. Anyone reviewing an appraisal should consider it accordingly. That is one of many reasons that mortgage lenders will finance only a percentage of the appraised value of a building.

Even if an appraisal is incredibly thoughtful, with hundreds of data points carefully analyzed by a brilliant real estate mind, it’s still just an estimate. The only way you can truly determine the value of real property is by finding out what an actual buyer pays for it in an actual transaction. That’s the only form of value that’s really solid. Everything else is just conversation, hopefully intelligent and well informed.

Moreover, appraised values (i.e., estimates of value) change over time, sometimes dramatically. If an owner signs a major lease at an impressively high rent, then a hypothetical buyer will pay more for that building because of its higher rent stream. So the building will be worth more than it was before the owner signed that lease.

Conversely, owners sometimes lose tenants. Leases expire. Tenants move out. Tenants go bankrupt. Tenants occasionally exercise cancellation options. When those things happen, the income of the building goes down, so a hypothetical buyer would pay less. Empty space has some value, but not as much as occupied space with high quality tenants paying rent under a long-term lease. And the next appraiser will estimate a lower value as a result of the vacancy.

In short, one shouldn’t take any claims about value too seriously. Anyone at the receiving end of such a statement would be a fool to believe it, especially if it comes from the owner of the property. Even if a statement of value is supported by an appraisal, the reliability of the statement depends entirely on the analysis in the appraisal. An appraisal isn’t necessarily the gospel truth.

Anyone reading an appraisal can decide for themselves whether it makes sense. If it doesn’t, then the value it predicts doesn’t make sense either. And even if it does make sense, it’s just one person’s best estimate of what another person ought to be willing to pay. It could change at any time.