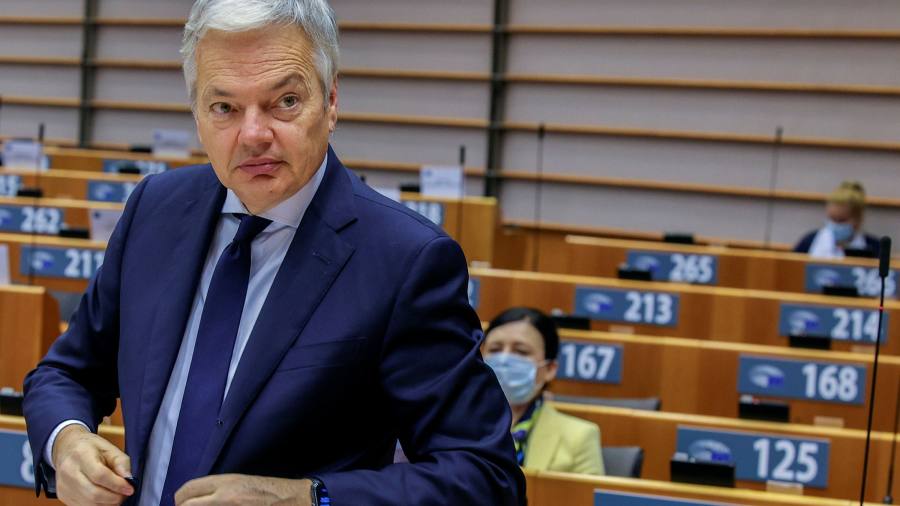 The EU’s justice commissioner has vowed to fight back against a proliferation of legal challenges and rulings by member states that have attacked the supremacy of EU law, warning that they could destroy the union itself.

In an interview with the Financial Times, Didier Reynders said that this increased questioning of the primacy of EU law — and the right of the European Court of Justice to have the final word — created a “spillover effect” that had emboldened others to follow suit.

In a sign of the perceived threat, the European Commission this month launched legal proceedings against Germany in response to an explosive ruling by its constitutional court last year that the ECJ had acted beyond its competence in a case related to European Central Bank bond-buying.

The next big legal challenge Brussels is bracing for is a decision by the Polish constitutional tribunal, which could come on July 13, on whether certain elements of the EU’s treaties are compatible with the constitution. The case, brought by Poland’s nationalist government, is regarded by legal experts as the most serious challenge yet to the EU’s legal order.

Reynders said Warsaw had been able “to use the example of the German decision” to mount its own case that the Polish constitution and its tribunal took precedence over EU treaties and the ECJ.

Senior EU officials are growing increasingly alarmed by these challenges to the supremacy of EU law, whether they come from eastern European countries such as Poland and Hungary, or from some of the EU’s founding member states, among them Germany and France.

Reynders said he did not realise when he took the justice job that it would be “so important” to defend the fundamental principles of EU law.

“What is the risk if we don’t take care of this? It is that we will destroy the union itself,” Reynders said. The EU was based on rules being applied consistently across its member states, so if this ceased to be the case the bloc could be undermined.

“When we have a problem in one member state, the risk is a spillover effect, that you will have in all the member states, or in some member states, a tendency to challenge the primacy of EU law and the exclusive competence of the Court of Justice,” he said.

In France, the government appealed to the Conseil Conseil d’État, France’s highest administrative court, to strike down an October ECJ ruling that collection of data by the security services breached privacy rules. Subsequently, Paris was partly rebuffed by the French court’s ruling in April.

Hungary meanwhile has referred a European court decision nullifying its immigration law back to its constitutional court rather than accept the ECJ decision as final.

As for last year’s German case, its constitutional court said the ECJ had failed to consider whether ECB asset purchases were proportionate.

The German court was eventually satisfied when provided with more information about the central bank’s strategy. Even so, Brussels launched infringement proceedings to defend the principle of ECJ supremacy.

“If you don’t stop that, you will have more and more possibilities for different member states to challenge the primacy of EU law and the competence of the ECJ,” Reynders said.

Poland is the most pressing next case. Laurent Pech, a professor of European law at Middlesex University, said a Polish ruling against ECJ supremacy would amount to “a nuclear strike against the EU legal order” as it “would not be dis-applying an ECJ judgment [as in the German case] but EU treaty provisions”.

In this case, the commission would have little option but to take legal action against Warsaw.

Reynders said he did “not want to wait weeks and weeks before reacting” to any Polish defiance of ECJ rulings. He has already taken the unusual step of asking Poland’s government to withdraw its petition to the constitutional tribunal before it delivers its judgment.

Even so, Pech and other legal scholars have strongly criticised the commission for not acting swiftly and robustly to protect judicial independence in Poland.

Since 2016, the Polish government has partially cleared out judges from the supreme court through forced retirement. It has also illegally appointed party loyalists to the constitutional tribunal, established a new chamber for disciplining judges and a new law constraining their independence.

Yet the commission has launched only two infringement procedures against Warsaw since Reynders took office in 2019. Critics say it was also too slow to take action to force Warsaw to comply with previous ECJ rulings. Brussels can apply to the court to impose fines on countries that do not comply with European court rulings.

Reynders rejected the criticism, saying: “We don’t have the same timelines as Twitter.”

The commission has also come under fire from members of the European parliament and legal experts for not immediately activating the EU’s new “conditionality mechanism”, which ties EU budget payments to respect for the rule of law.

Reynders said Brussels had begun work in monitoring the actions of member states and had drawn up guidelines on applying the new mechanism. It would take a decision on opening cases after the summer.