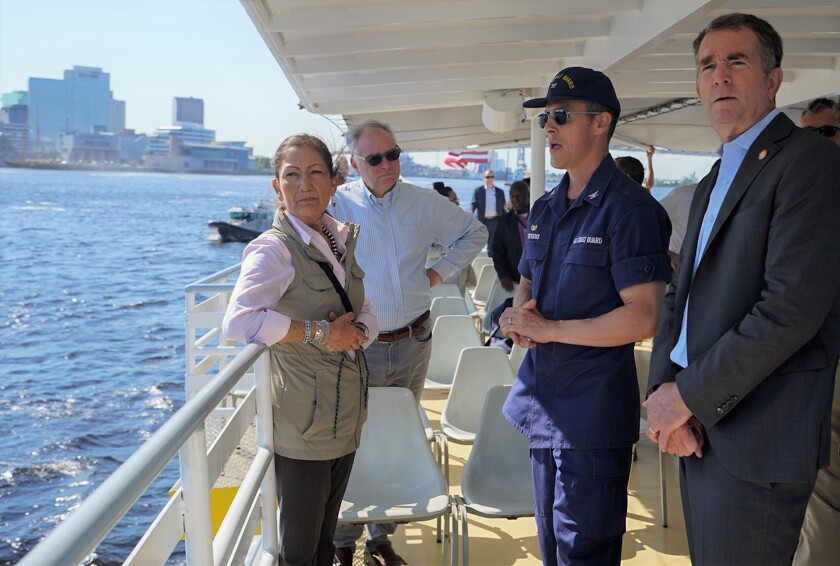 The Bureau of Ocean Energy Management will begin an environmental review on the Coastal Virginia Offshore Wind project, a first step in the permitting process for Dominion Energy’s 2.6-gigawatt commercial wind project.

U.S. Department of Interior Secretary Deb Haaland announced the review on a tour of the port on Thursday for the project, which is located 27 miles off the coast of Virginia Beach.

On June 14, Gov. Ralph Northam said all new wind projects would use the new federal permitting process. The announcement follows the recent agreement between the BOEM and the United States Army Corps of Engineers that will give federal agencies more resources to evaluate the pros and cons of offshore wind projects.

“The demand for offshore wind energy has never been greater,” Haaland said in a statement. “Today’s tour and meetings were a great chance to learn about the commonwealth’s continued leadership role in developing the offshore wind industry and attracting and supporting the domestic supply chain.”

The Virginia port is being upgraded to be able to accommodate the capacity necessary in the construction of offshore wind projects in the Mid-Atlantic region. Officials also discussed the workforce needs of offshore wind industry, which is expected to see over 80,000 jobs created in the U.S. by 2030.

“Virginia is all in on offshore wind,” Northam said. “We are developing the infrastructure, workforce, supply chain, and manufacturing capabilities needed to capture the many benefits of this emerging industry.”

The state is home to the largest maritime industrial base in the U.S. and a port designed to support the offshore wind supply chain. Virginia has also partnered with other states along the East Coast to encourage best policy and practices.

There are currently only a few wind power projects, totaling just over 300 megawatts of capacity, scattered across the Southeast, in Virginia, West Virginia, North Carolina and Tennessee. Municipal utilities have sold bonds elsewhere in the country to support and finance wind farm projects.

In a September study, Magnum Economics estimated the $8 billion of investment by Dominion Energy and up to $40 million from the state the project “will support about 900 direct and indirect Virginia jobs annually (about 60% Hampton Roads), with almost $57 million in pay and benefits and over $143 million in economic output, generating almost $2 million in revenues for local governments in the Hampton Roads area, and an additional $3 million in Virginia state tax revenues.”

When construction is completed in 2027, “we estimate that the annual operation and maintenance of the facility will support over 1,100 direct and indirect jobs annually in Hampton Roads, with almost $82 million in pay and benefits, and almost $210 million in economic output, generating almost $6 million in revenues for local governments in the Hampton Roads area, and an additional $5 million in Virginia state tax revenues,” Magnum Economics reported.

“Investing in clean energy is an invaluable investment in our future,’” Kaine said. “I will continue to support Virginia’s growing offshore wind industry to protect the environment, create jobs, and strengthen our clean energy economy.”