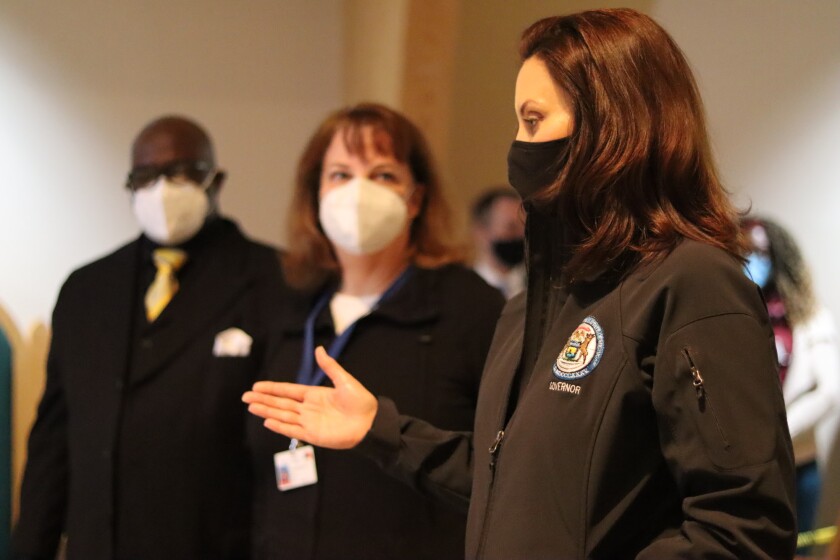 S&P’s action Wednesday came as lawmakers approved the school aid portion of the state’s fiscal 2022 budget, and it followed Fitch Ratings raising its outlook to positive from stable earlier in June.

“Michigan has emerged from the most recent recession better than originally anticipated, with a monthly unemployment rate currently below the national average, after initially being much higher; strong demand for its manufacturing products, particularly as vehicle sales have grown; and smaller draws on its rainy-day fund than initially expected,” S&P said Wednesday. “Improved revenue forecasts and additional federal aid indicate that the state, in our view, will likely maintain adequate reserves for the near future.”

S&P shifted the outlook to negative last July over concerns that the financial beating from the pandemic would be prolonged given its high concentration in the service and manufacturing sectors with a recovery that would possibly lag other states.

The state drew $350 million in reserves to help cover initial tax revenue losses from the pandemic but since then its fiscal picture has stabilized thanks to an influx of federal relief that bolstered the economy and drove up tax revenue collections. Gov. Gretchen Whitmer’s $67 billion budget proposal restores the reserve draw.

Michigan expects a $3.5 billion revenue surge through the next fiscal year due to its accelerating economic recovery. That will allow the state to close out the fiscal year Sept. 30 with $26.31 billion in general and school aid fund revenue, up $2.04 billion from a January estimate, according to the state’s May consensus revenue estimating conference. The state also raised fiscal 2022 revenue projections by $1.48 billion to $26.8 billion and fiscal 2023 estimates by $1.8 billion to $27.7 billion.

The numbers mark a sharp turnaround from last May’s estimating conference, early in the coronavirus pandemic, which predicted multi-billion-dollar revenue hits as the state put together its fiscal 2021 budget.

The rosier revenue projections helped ease tensions between Whitmer, a Democrat, and the legislature’s GOP majorities as they agreed to a budget framework in the spring.

Despite the effort to work together, lawmakers only managed to pass the school aid portion of the budget by a July 1 deadline and will need to return later in the summer to complete the general fund portion and to finalize plans on proposed spending of a portion of the state’s federal relief. The next fiscal year begins Oct. 1.

The state has $2 billion of remaining CARES Act dollars from its $3.1 billion allotment last year and is receiving $6.5 billion from the American Rescue Plan Act.

Lawmakers signed off on a $17.1 billion budget for kindergarten through 12th grade education that raises spending from $15.5 billion this year.

“The bipartisan school aid bill makes historic investments in our children without raising taxes and will help each and every student thrive academically, mentally, and physically,” Whitmer said in a statement. “I look forward to signing this legislation to expand the Great Start Readiness preschool program for 22,000 more children and connect more students to counselors, psychologists, and nurses in their schools. The bill also delivers on a decades-old goal to close the K-12 school funding gap.”

Whitmer pressed the legislature to get back to work on the general budget appropriations saying there is a sense of urgency to provide disaster aid for recent flooding that hit areas of the state including Detroit and to act to infrastructure funding.