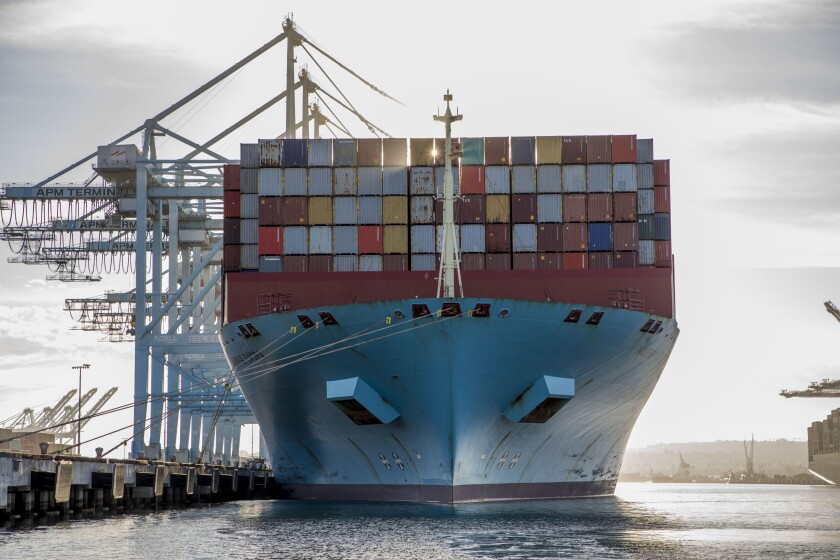 The Port of Los Angeles received an outlook lift to positive from S&P Global Ratings as it marks the highest level of traffic experienced in the history of the 114-year-old port.

S&P rates the port AA. The action affects $665.7 million of bonds, all fixed rate, with no commercial paper draws outstanding, according to the rating agency.

Cargo traffic nosedived in early 2020 amid the global COVID-19 pandemic, but reversed dramatically during the summer, bringing a record number of containers into the port.

The port expected to hit 10.4 million twenty-foot equivalent units by June 30, the end of its fiscal year, which is close 1 million, more than the prior year, said S&P analyst Kevin Archer.

The port’s container traffic, measured in TEUs, hit 9.7 million TEUs in 2019, but has hovered around 9 million for the past few years prior, Archer said.

.
“There has been so much activity and demand that has caused congestion, pushing traffic up north to other West Coast ports — and the port still had an increase in TEUs,” Archer said.

Challenges include the resolution of congestion issues that have resulted in traffic being diverted to other West Coast ports as ships backed up in the harbor, and potential impacts from the frosty trade relationship between the U.S. and China, he said.

The AA rating is the highest S&P rates any landlord port that doesn’t have taxing power. For instance, the Port of Houston is rated AA-plus, but it has a property tax, he said.

The port saw the busiest month yet for container traffic in May with 1.74 million TEUs, a 17% increase compared to the same month a year earlier, Archer said.

“The sense is that the congestion will get better and activity at the port will normalize,” Archer said. “As states have re-opened, consumers are expected to shift their buying habits to purchasing more services, and fewer goods. As they get back to a more diverse expenditure base, those unsustainable levels of 10 million TEUx should normalize.”