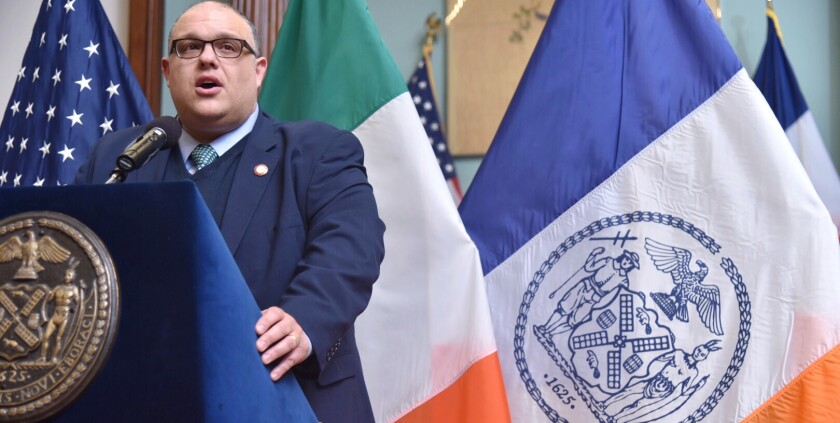 “My charge is to make sure we are spending wisely, safeguarding our city’s financial future, and fortifying the city’s social safety net for New Yorkers who need it most,” Brannan, a hardcore punk rocker before turning to politics, said when his leadership position was announced Thursday. “Our recovery will not be exclusive to the privileged or the powerful. Our recovery will be for everyone.”

The powerful Finance Committee works with the mayor and the Office of Management and Budget to get an annual budget approved before the July 1 start of the new fiscal year.

Newly inaugurated Mayor Eric Adams has until mid-February to present his preliminary budget for fiscal 2023.

The latest financial plan update was released in November by his predecessor, Bill de Blasio. The $102.8 billion spending plan was up 4.2% from the $98.7 billion budget the city adopted last June. The city faces gaps of $2.9 billion, $2.7 billion and $2.1 billion running from fiscal years 2023 through 2025.

After the preliminary budget is unveiled, the 51-member city council will hold a series of public hearings on it. By the end of April, the mayor will release his executive budget.

The council will issue its response to that plan and then hold a second round of hearings after which they will negotiate adjustments with the mayor and his Office of Management and Budget. By law, the council must vote on a budget by July 1.

Meanwhile, Adams announced how he plans to achieve his promise of getting his first three paychecks in cryptocurrency.

“New York is the center of the world and we want it to be the center of cryptocurrency and other financial innovations,” Adams said in a news release.

The city can’t actually pay its employees in cryptocurrencies, which are virtual speculative instruments recorded on an electronic ledger.

In the mayor’s case, according to the news release, before the funds are made available, the paycheck will automatically be converted from dollars into Ethereum and Bitcoin via Coinbase, a cryptocurrency exchange platform available to anyone.

“Being on the forefront of such innovation will help us create jobs, improve our economy, and continue to be a magnet for talent from all over the globe,” Adams said Thursday.

In November, Adams vowed to take his first three paychecks in cryptocurrency.

“From being the primary means by which we close both the digital and financial divide, technology continues to be the great equalizer,” said Matt Fraser, the city’s chief technology officer. “This step taken by the mayor provides a leading example of how we can empower people through tech with a more diverse set of options to manage their finances.”