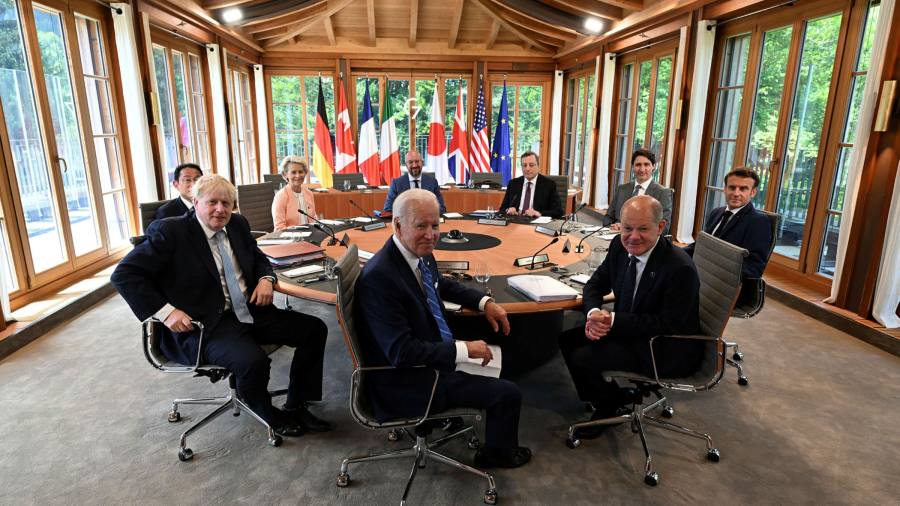 G7 leaders meeting for a summit in the Bavarian Alps on Sunday are seeking a deal to impose a “price cap” on Russian oil as the group works to curb Russia’s ability to finance its four-month war in Ukraine.

The goal would be for a broad range of countries going beyond the G7 to impose a ceiling on the price paid for Russian oil in order to limit the benefit to the Kremlin war machine of the soaring crude price. It would also cushion the impact of higher energy prices on western economies.

The idea has been strongly promoted by the US. Although Germany has long had reservations about it, recent comments by German officials suggest that Berlin is coming around to the idea.

Charles Michel, the president of the European Council, said leaders would discuss the oil price cap in the hours ahead, stressing the need for a “clear vision” and awareness of the possible knock-on effects.

Such a deal would require the support of all 27 EU member states and officials would need to resolve difficult questions about how it would work and fit in with US, British, European and Japanese sanctions regimes.

The EU in May agreed to a phased-in ban on seaborne Russian oil shipments, while permitting temporary carve outs for crude delivered via pipeline. The measures are expected to cut Russian oil exports to the EU by 90 per cent by the end of this year.

The G7 leaders are meeting as the fallout from the war in Ukraine casts an ever-larger shadow over the global economy. The blockade of Ukrainian ports has pushed up food prices and Russia’s decision to cut gas supplies to Europe is threatening an energy crunch.

As inflation soars and central banks respond with more aggressive interest rate rises than markets expected, economists across the world are downgrading their growth forecasts with some even warning of recession.

The meeting, in the luxury Bavarian resort of Schloss Elmau, is being hosted by German chancellor Olaf Scholz. He has been joined by the leaders of the US, UK, France, Italy, Japan and Canada. Argentina, South Africa, Senegal, Indonesia and India have been invited as “partner” countries.

G7 leaders announced on Sunday that they would ban imports of Russian gold, part of efforts to ratchet up sanctions against Moscow. “We need to starve the Putin regime of its funding,” said UK prime minister Boris Johnson. “The UK and our allies are doing just that.”

A German official said that on Ukraine the G7 would aim to convey a “message of unity” and “signal support” for Kyiv. Ukraine’s president Volodymyr Zelenskyy will join the summit by video link on Monday.

Johnson on Sunday reiterated the need to maintain consensus in the face of Russian aggression in Ukraine, warning that there could be “fatigue” among “populations and politicians”.

Questioned on whether he was concerned about support for Ukraine weakening, Johnson replied: “I think the pressure is there and the anxiety is there, we’ve got to be honest about that.”

The idea of an oil price cap comes at a time when experts are worrying that sanctions against Russia risk backfiring. Despite western restrictions on Russian oil imports, Russia’s revenues from oil exports have not necessarily declined because the price of crude has risen so sharply.

Michel said: “We want to make sure that the goal is to target Russia and not to make our life more difficult and more complex. We need to make sure if we take such a decision there is a clear vision, a clear common understanding, of what are direct effects and what could be the collateral consequences.”

He said the EU was ready to take a decision with its partners but stressed he was “careful and cautious” on the topic.

A senior German official said “intensive discussions” were under way as to how a price cap would be implemented and work with western and Japanese sanctions.

“The issues we have to solve are not trivial, but we’re on the right track towards coming to an agreement,” he said.

Under the oil price-capping scheme, Europe would limit the availability of shipping and insurance services that enable the transport of Russian oil around the world, mandating that the services would only be available if the price ceiling was observed by the oil importer. A similar restriction on the availability of US financial services could give the scheme added impact.

Scholz has stressed that the concept would require widespread buy-in around the world to be effective.

It would also require the EU to amend its ban on insuring Russian crude shipments — introduced in conjunction with the ban on seaborne oil imports — something that needs the buy-in of all 27 EU member states.

The UK would need to come on board, given it is the home of the Lloyd’s of London insurance market. The EU and UK already agreed to co-ordinate on an insurance ban, but London has not yet finalised its scheme.

At their summit, the G7 leaders will also discuss how to avert a global “hunger crisis”, amid rising food insecurity caused by the Ukraine war. They will also discuss a German proposal for a “climate club” in which participating countries will co-ordinate their efforts to decarbonise their economies.