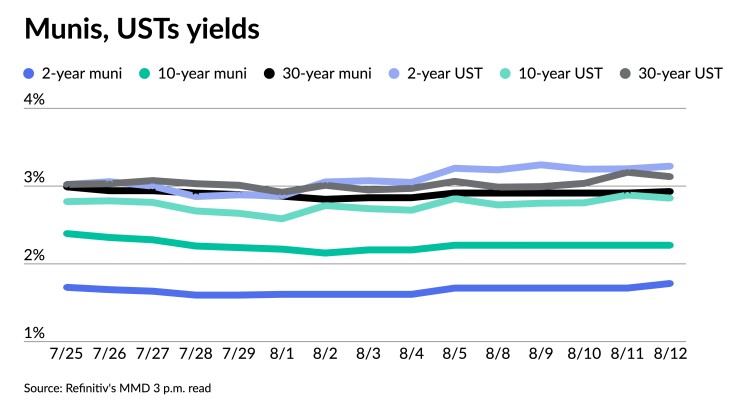 Short-end munis sold off Friday as pressure from two-year U.S. Treasury yields as well as rising floating-rate muni yields have begun to hit the triple-A yield curves. Treasuries were better five years and out while equities rallied to close out the week.

Triple-A curves saw yields rise by as much as eight to 10 basis points on the one- and two-year, respectively, and one to two basis points outside of four years, while UST saw yields fall five-years and out. The two-year UST note closed the week at 3.253%, higher than the rest of the UST yield curve, save for the 20-year.

“Short-dated tax-exempts remain extremely rich, especially compared with the SIFMA index, which has continued moving higher, and its current level is similar to that of five-year AAAs, which begs the question, ‘Why anybody would buy short-dated tax-exempts at the moment?'” said Barclays strategists Mikhail Foux, Clare Pickering and Mayur Patel in a weekly report.

Short ratios are still quite rich to UST at about 54%-55% in two- and three-years.

Despite volatility in UST, continued inflation concerns and the short-end pressure to close out this week, many participants are pointing toward a market with strong technicals as keeping most of the muni market stable.

“In July, we expected muni markets to remain quite volatile, but the market definitely has not been as active as we expected this month,” noted Barclays strategists. “Heavy summer redemptions provide market support; supply is still well-below expectations, although we do expect the pipeline to become much more active in the autumn; large outflows have largely stopped, and we do not expect too much more in the fall; finally, dealer inventories are light.”

As tax-exempts are quite rich, “taxables have much more value at the moment,” they said.

“Long-dated taxable municipals trade at similar spreads to corporates, and single-As and double-As actually have more value than them,” they said. “If corporate spreads move significantly higher in the autumn, taxable will undoubtedly follow, but will likely outperform by a wide margin.”

Barclays strategists said while they were not “happy with valuations,” they expect tax-exempts will likely move sideways for the rest of August, ”and then a lot will depend on what happens in the fall — we are still very cautious.”

Bond volume grows
New-issue volume grows next week to $10.728 billion led by a $2.7 billion taxable Massachusetts social bond deal — the largest muni ESG yet — that had been delayed by some last-minute legislative spending debate that did not come to pass.

There are $8.543 billion of negotiated deals on tap and $2.185 billion of competitive loans.

Oklahoma Development Finance Authority is set to bring $1.35 billion of taxable ratepayer-backed Oklahoma Natural Gas Company bonds and the Regents of the University of California has $1.25 billion of exempts, taxables and forward-delivery general revenue bonds scheduled.

Treasuries were weaker at the close.

The Community Facilities District No. 2021-1 of Orange County, California, is set to price on Wednesday $118.720 million of Series A of 2022 special tax bonds. Piper Sandler & Co.