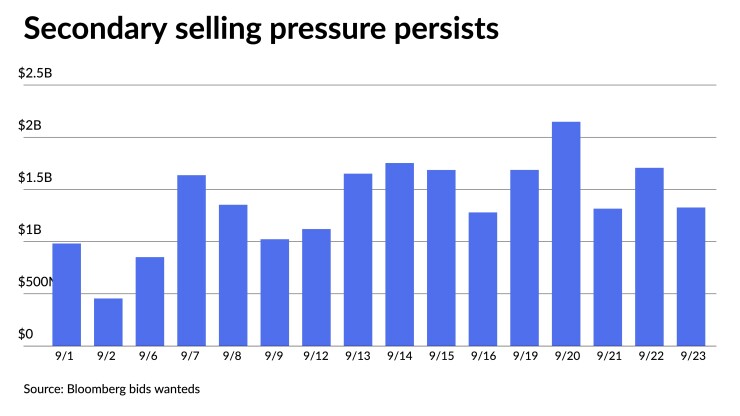 Triple-A municipal yields rose as much as 18 basis points on the short end, with the one-year just below or above 3%, further flattening the curve. The two-year UST hit 4.3% while the 10-year climbed 21 basis points Monday.

The Treasury yield curve is flat and inverted in some areas, ”suggesting that many investors believe the Fed will show it has inflation contained sooner rather than later,” a report from Nuveen’s John Miller and Anders S. Persson said Monday. “They are betting longer-term bonds — which currently yield less than short-term bonds — will rally once inflation is controlled.”

“Although munis continue to sell off, they are bid constructively,” Nuveen said. “Institutions continue to trade daily to rework portfolios, and individual investors remain interested. We expect heightened volatility through year end, but anticipate a constructive year for fixed income in 2023.”

Cautiously optimistic is how investors are approaching the market.

A “watch and see kind of tone” clashed with the Rosh Hashanah holiday and low supply in the municipal market on Monday, making for a mixed environment on the buy-side, according to Timothy Barbera, head of underwriting, sales and trading at Rice Financial.

Issuers will test investor sentiments with a larger calendar to close out September, led by Illinois GOs, more than $1 billion of New York state personal income tax bonds and nearly $1 billion of Texas water revenue bonds, among other well-known credits.

The structure and pricing of new deals coming this week will be important to gauge investor demand, market participants said.

“Deals will have to be priced with some concession in order to get done,” Barbera said, as triple-A yields continue to rise.

Those higher yields recently have attracted investor attention, although they are still skittish overall, according to Tom Kozlik, head of municipal research and analytics at Hilltop Securities Inc.

“Investors are generally skeptical at the moment,” Kozlik said on Monday. The severity of that skepticism varies institution to institution and investor to investor, he said.

Kozlik said the retail crowd has begun to participate a little more in recent weeks, as a result of the recent rise in yields to more attractive levels.

“I think technical indicators are among the most attractive they have been all year,” he said, pointing to a Monday Hilltop report.

The report encouraged investors to take a fresh look at municipal bonds in the current climate, which offers “appealing investment opportunities in the sector,” Kozlik said. “Municipal bond market credit and technical indicators are again flashing the appropriate constructive signals.”

The supply and demand picture isn’t expected to be rosy in the fourth quarter due to the expectations for below-average issuance, Kozlik said, however, he said public finance upgrades are expected to outpace downgrades in the current and final quarter of 2022.

The bad news: “I am expecting more outflows and there is nothing I am seeing that can convince me otherwise at the moment,” Kozlik said.

“Apprehension defines the current state of the municipal bond market as the Fed takes interest rates higher through at least the first quarter of 2023,” Jeff Lipton of Oppenheimer Inc. said Monday.

“A looming holiday season and the fact that there are two remaining FOMC meetings for the year will likely influence 2022 muni issuance to the downside,” he said.

Like Kozlik, Lipton agreed there are opportunities to be had in the current municipal market.

“Value opportunities are available for the patient and resilient long-term municipal bond investor relative to risk assets, and munis can represent a safe haven for risk-off investors seeking to expand portfolio diversification,” he said in the report.

Lipton expects this dynamic to persist for some time, particularly as inflation and a tight labor market have been resistant to higher interest rates, he said. “Now is the time to lock in tax-efficiency, strong credit quality in support of capital preservation, and compelling income streams thanks to higher interest rate conditions,” he said.

Outflows, which are running at about $85 billion year to date, continue given the existing liquidity needs from mutual fund complexes, albeit at a reduced pace compared to the heavier withdrawals earlier in the year, according to the report.

Much of that money seems to be moving into cash alternatives, Lipton noted.

“In our view, once muni yields appear to reach their peak, we can expect to see a meaningful repricing of the asset class with a significant easing in bid-wanted activity and a return to an inflow bias as institutional investors put much of this sidelined cash to work,” Lipton wrote.

Lipton said he believes relative value is on display on the long end of the municipal yield curve, with cheap ratios out long.

“At these levels, we watch for signs of greater crossover buyer interest, and this could come from traditional corporate bond investors,” Lipton said.

Additionally, the state is set to sell $280 million of general obligation bonds, Series of October 2022C, at 11:45 a.m. Wednesday.

For Emily Dickinson’s Birthday, Visit Her New England Home
What is an Ethereum Virtual Machine (EVM) and how does it work?
Twitter disbands Brussels office, prompting fears about online safety
Sale of Oklahoma senior living facilities sought in bankruptcy
November on pace for best month since 1986