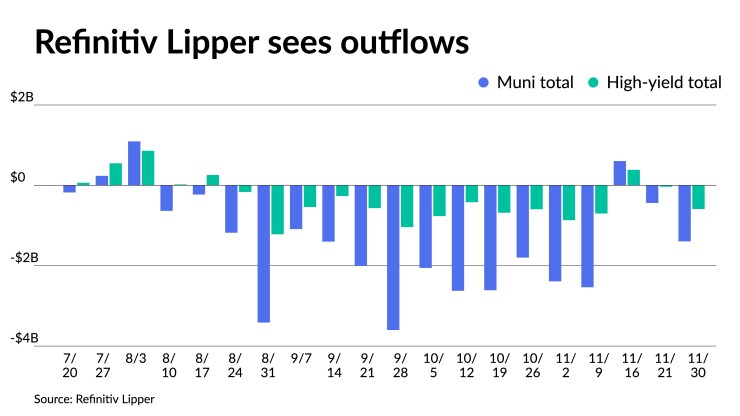 Municipals rallied on the short end to kick off December with the one-year triple-A muni dropping below 2.50%. U.S. Treasuries rallied across the curve, and equities were mixed.

Triple-A yields fell up to 10 basis points on the short end and made gains across the curve. UST improved with the largest gains out long.

Outflows continued as Refinitiv Lipper reported $1.394 billion was pulled from municipal bond mutual funds for the week ending Wednesday after $438.381 million of outflows the week prior.

Munis benefited from limited supply — November volume issuance stood at $19.7 billion, the lowest month of the year — “coupled with favorable redemption figures, but also a UST market finding more reason to be constructive about future rate hikes,” she said.

Munis saw the best performance in November in decades. The Bloomberg Municipal Index was in the positive by 4.68%.

“A sizable bite has been taken out of the sector due to substantially higher interest rates impacting refunding opportunities,” she said.

MSRB data indicates taxables garnered around 10% of all secondary volume during November.

“As yields continued to fall, a risk-on theme took hold with revenue categories catching a bid at the expense of GO bonds,” she said.

General obligation bonds returned 4.40% while revenue bonds came in at 4.99% in the black.

“Short-dated bonds were up just over 1% and are just negative on the year,” while intermediate bonds gained 4% “but at the expense of the coveted 3% yield in 2030-2032 maturities,” according to Olsan.

November trades surpassed October’s previous record of 1.25 million trades, the MSRB said. The month’s trades were more than double the volume in November 2021.

December begins with lower yields, light supply
Supply shortages and uncertainty over the levels of absolute yields are among the chief concerns facing municipal investors as December got under way on Thursday, according to Tom Kozlik, managing director and head of municipal research and analytics at Hilltop Securities.

“Market participants are continuing to right-size their expectations on the supply side in the near term and for the rest of the year,” Kozlik said Thursday.

He noted that it wasn’t too long ago at the start of September 2021 that analysts were calling for a record or at least a near-record amount of issuance for 2022.

However, “a record amount of issuance has been an unrealistic expectation since March,” Kozlik said.

And even though Federal Reserve Board chairman Jerome Powell confirmed Wednesday that smaller interest rate increases are likely ahead and could start as early as next month, investors are still somewhat queasy over rates, according to Kozlik.

“Uncertainty still remains about the levels of absolute rates even though the Fed chair is trying to manage this,” he said.

Overall, Kozlik doesn’t expect much in the way of big changes between now and the end of 2022.

“Issuance activity will remain very challenged,” he said. “I am expecting primary market municipal supply to be the lowest in December than we have seen in years.”

At the same time, he said institutional investors may try to put money to work before year-end, but might be at a loss for paper.

“It seems like there is still not going to be relief from outflows so that may be hard,” Kozlik said.

Concerns about the general direction of the U.S. economy, fall-out from crypto activity, and regional housing market shifts are all among the themes likely adding to the weight already on municipal investors’ shoulders at year-end, according to Kozlik.

Through year-end, investors will be looking for any new or different policy changes from the Federal Reserve and any new guidance on inflation from the economy.

“Investors will continue to prepare for the worst and hope for the best,” Kozlik said.